Get the Latest COVID-19 and Vaccine Information

NOTICE: Masks Must Still Be Worn at All Times Within the Hospital

Take it From One of Our Own 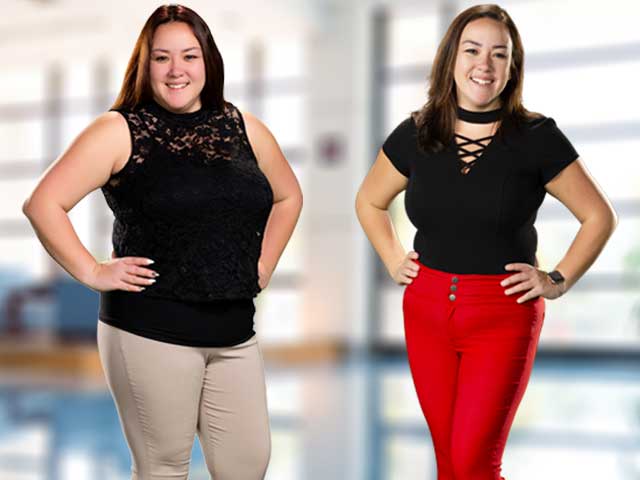 It started shortly after the birth of her son, now 10 years old. Having gained about 50 pounds with the pregnancy, Ashley Seminuk went on a few diets, coupling them with consistent exercise outdoors. These enabled her to keep her weight in check, give or take 10 pounds.

Growing up, Ashley​ never had an issue with weight. As an adult, she weighed 140 pounds and enjoyed lots of outdoor activities, as well as hot Pilates in her native Hawaii. Flash forward eight years to marriage, two children, and a move to Las Vegas, where she managed a fertility practice and Ashley​ soon found herself in a position she never thought she’d be: battling obesity.

After the birth of her second child five years ago, Ashley​ claimed, “I felt like a yo-yo … I lost 20 pounds, but then it came right back. And then some.” As with her first child, the weight came off with diet and exercise, but over the next two to three years, Ashley​ gained 80-90 pounds. “I was never an emotional or stress eater, but I had a huge appetite.” The added weight began to take a toll on herself, her family and her life. When a simple walk down the hallway became a chore, Ashley​ knew she needed to do something.

Taking the Next Step

As a practice supervisor for Surgical Weight Control Center of Las Vegas, which performs more than 50 bariatric surgeries per month, Ashley​ saw patients’ lives transformed. She stated, “Their stories inspired me to move forward with bariatric surgery.” She consulted with her husband, family and highly skilled doctor, Marc R. Leduc, MD, FACS, FASMBS, a board-certified surgeon specializing in bariatric surgery, all of whom were supportive of her decision.

As required by The Center for Surgical Weight Loss at Desert Springs Hospital Medical Center, as well as insurance companies, Ashley​ attended six nutrition classes (all covered by insurance plans) prior to her surgery. She said, “The classes were extremely beneficial. Taught by a registered dietitian, they helped me understand the importance of not eating junk food. I didn’t know what nutritional value meant … I was careless and not mindful of my eating habits.” The classes also explained everything that she would be going through during and after the procedure. For this reason, Ashley​ highly recommends the classes to anyone considering weight-loss surgery. She also completed a psychological evaluation to ensure that she did not suffer from any mental issues such as underlying depression commonly seen among patients, but also understood that the surgery demands a lifestyle change.

Dr. Leduc considered Ashley​ a suitable candidate for the gastric sleeve, the most common weight-loss surgical procedure entailing five small incisions in the stomach area and an overnight stay. The surgery was scheduled one month after she completed the classes.

Aside from a bloated feeling, Ashley​ said the minimally invasive procedure was not difficult and she was back to work within 10 days. Darren Soong, MD, FACS, FASMBS, the assisting surgeon, the nurses and staff were extremely supportive and checked in on her regularly. Ashley boasted, “I trusted the team completely.” As recommended, she started exercising (walking or a light jog) after a few weeks, avoiding heavy lifting.

Nearly one year from surgery, Ashley​ is looking and feeling great! Although Ashley’s husband would love her at any weight, he is thrilled that she has lost 83 pounds to date. Ashley​ lifts weights, takes walks, and follows a moderate diet, all of which has taken discipline and embracing a new approach to food. “Everybody is different, but I now look at food differently, eating to live rather than living to eat.” Instead of eating heaping helpings or two of everything, Ashley controls herself and limits intake to a piece of a vegetable, a protein (usually seafood) and fruit in moderation. Her overall appetite changed. Ashley noted “It was not a big deal for me to change my lifestyle … I don’t even think about it anymore.” What does she think about now that everything fits? “Shopping!” Most importantly Ashley​ has more confidence, feels better, looks better, is less groggy, happier and has much more energy.

Individual results may vary. There are risks associated with any surgical procedure. Talk with your doctor about these risks to find out if bariatric surgery is right for you.

For additional information about weight-loss surgery, read some commonly asked questions. You can also contact The Center for Surgical Weight Loss at Desert Springs Hospital by completing this form or calling 702-369-7618.

Get a Physician Referral

If you need a referral to a weight-loss surgeon or other physician at Desert Springs Hospital Medical Center, call our free physician referral service at 1-702-388-4888.

There were no results for your search.